Now you can watch all the adult content you want on the go. HP has designed a new integrated privacy screen in partnership with 3M to combat what the company calls “visual hacking.” In other words: creepers looking over your shoulder. The Sure View screen will be available on touchscreen versions of the company’s Elitebook 840 and 1040 laptops in September, and on nontouch ones in October. I got an early look at the new panels, which were mostly useful and effective.

Sure View eliminates the need to stick an additional privacy filter onto your screen, which can be cumbersome and annoying. Plus, privacy filters cost between $30 and $80 a pop, and if you damage or lose one, that can be a pricey replacement. So it’s easy to see why this implementation is a benefit. 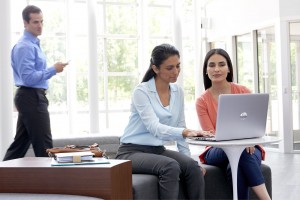 HP also made it pretty easy to activate the privacy mode. You’ll just have to hit Fn + F2 to switch it on and off. This worked quickly and seamlessly when I saw it at an HP demo, and as I moved from side to side, the contents on the screen did get blacked out once I was at more than 10 degrees away.

While it’s easy to imagine this feature being used for sketchy media consumption in public places, Sure View actually has a lot of practical uses. It would probably be most helpful to business people dealing with sensitive financial information or updating classified presentations on the go.

Pricing is still being determined. On some higher-end configurations of the 840 and 1040 notebooks, which start at $1,249 and $1,449 respectively, the Sure View fee could be absorbed. The screen add-on could cost up to $75 in other setups. If you frequently deal with sensitive data in public, you might want to check out the new notebooks come September. In the meantime, you should really check out the pictures in the gallery of random people creeping on HP laptop users to know what you’re dealing with.