Cinema lobbies continue to one of the hotter environments for ambitious, big budget signature displays – with the latest evidence of that a 96-panel “StoryWall” at the ArcLight Cinemas in Sherman Oaks, California.

The beast is about 50-feet wide and 15-feet high, and runs a matrix of movie posters or full-wide visuals about a specific movie. The effort is a partnership with Cinema Scene Marketing and OUTFRONT Media, so presumably there may also be non-movie ad buys on the wall. 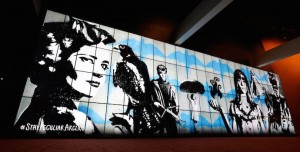 “ArcLight has always provided an unparalleled moviegoing experience for film lovers because ArcLight is more than just a place to see a movie, it’s an experience,” says Gretchen McCourt, Executive Vice President at ArcLight Cinemas. “Our poster wall has been a staple to the ArcLight experience and now, in working with Cinema Scene, we’ll be offering our guests an even more immersive and digitally visual experience with the debut of the ArcLight StoryWall.”

Cinema Scene provided the hardware and managed the installation for the StoryWall and will do ongoing content management, software service and technical support. The company is in the business of delivering studios’ promotional campaigns in moviehouses, running digital lobby advertising networks and providing digital signage solutions to the cinema market. 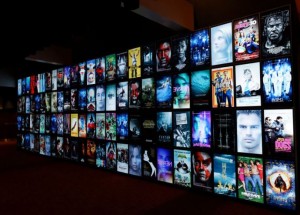 The big video wall, interestingly, is running off OUTFRONT Media’s own ON Smart Media software platform. A little weirdly, maybe, the company describes the set-up not as LCDs but  as an “ultra-slim (12.7 mm thick) ON Smart Liveboard that boasts a staggering 188 mega-pixel resolution at a pixel pitch of .55mm.”

Pixel pitch is now a common term for LED display walls – the tightest of them being .85mm (I think). Unless this is entirely new tech, I’m pretty sure these are just LCDs, and if it is LED, why the seams?